Let’s consider an H4 chart of EUR/USD instrument. As oil prices keep falling and FED reports have positive decline, we observe the US dollar strengthening against the most liquid currencies. European currency is not an exception as well. The price keeps moving in frame of H4, D1 tendencies – the scale synchronization is observed. A signal of trend indicator ParabolicSAR slides along a four-hour trend line, thus confirming the bearish direction. The slope of the Donchian channel is also directed toward the red zone. The only alarm at the moment is a breakdown of the RSI-Bars trend line. The signal can be false only if the 19.3150% support intersection occurs. Most likely, that at this moment the price overcomes a fractal mark of 1.22147, which can be used for pending order opening. At the same time an intersection of Donchian Channel lower boundary is expected. Risks can be limited above the resistance 1.23061, which coincides with the trend line H4 and the historical values of Parabolic. 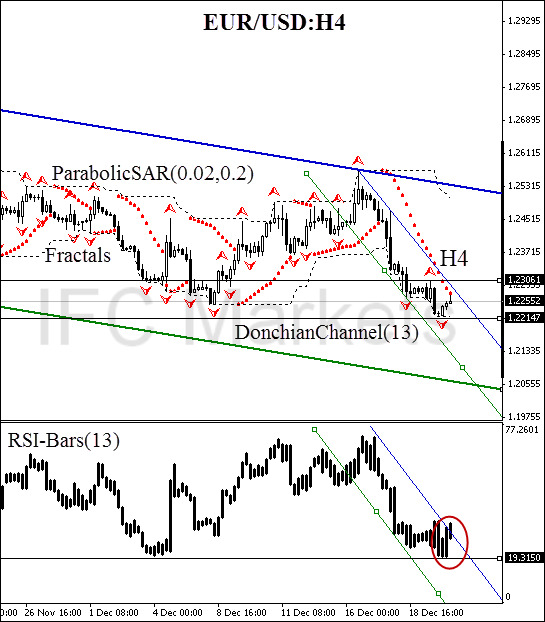 After position opening, Stop Loss is to be moved after the Parabolic values, near the next fractal maximum. Updating is enough to be done every day after a new Bill Williams fractal formation (5 candlesticks). Thus, we are changing the probable profit/loss ratio to the breakeven point.