Posted by Administrator on Dec 1, 2014 in Forex Forecasts & Analysis | 14 comments

The fallen oil futures prices after the OPEC meeting resulted in a significant depreciation of commodity currencies against the US dollar: it was in favour of USD and led to a significant strengthening of the dollar index. Today at 14:00 CET we expect the monthly release of ISM Manufacturing PMI in the United States. This diffusion index is based on a survey of 400 purchasing managers in the manufacturing industry, which evaluate employment, output volume, orders and stockpiles. It is the most important economic indicator as it permits obtaining preliminary information on manufacturing activity which affects the investor optimism. In our opinion, the greatest volatility is expected today from the US currency relative to other liquid instruments of the currency market. 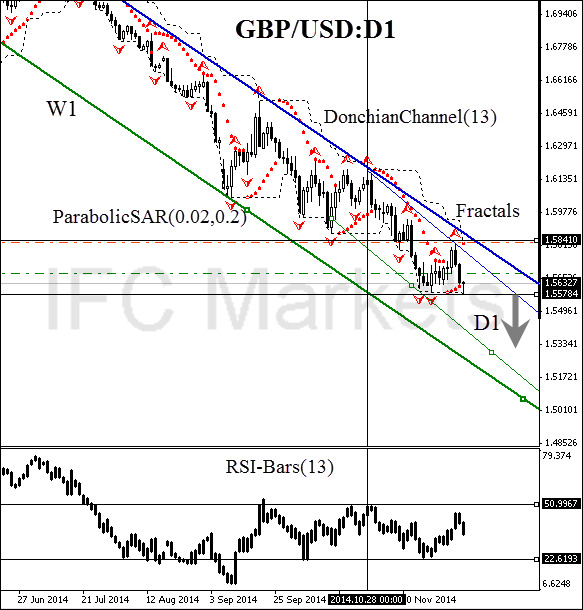 Here we consider the GBP/USD currency pair on the D1 chart. The price is preparing to move in the direction of the red zone, as evidenced by the Parabolic reversal. The fractal resistance level at 1.58410 is crossing the daily bearish trend line, which makes this mark suitable for reliable risk mitigation of a short position. This level is also confirmed by the upper Donchian Channel boundary. A pending sell order can be placed below 1.55784, which is confirmed by Parabolic historical values and the Bill Williams fractal. Conservative traders are recommended to look for the RSI-Bars support level breakout at 22.6194%. This signal must confirm the opening of a pending order. We can see the volume of futures traded on Chicago Mercantile Exchange outperformed the highest level of 125000 contracts: the downtrend is likely to maintain. The trading volume confirms the birth of a new trend.