Posted by Administrator on Dec 15, 2014 in Forex Forecasts & Analysis | 0 comments

On Friday the US markets dipped despite the release of positive macroeconomic reports. Consumer confidence index hit the January high and reached 93.8 points. However, S&P 500 has tumbled 3.5% this week, for the first time after seven weeks of continuous growth. It is the largest weekly slump since May 2012. We deem that market participants are taking profits. As oil prices keep falling, shares of oil companies such as Exxon Mobil and Chevron Corp hit yearly lows.

Adobe Systems stocks rose 9% due to positive reports and plans of Fotolia purchasing. The trading volume on the US exchanges on Friday was 11% higher than the monthly average and amounted to 7.6 billion stocks. Today we expect the release of the US industrial production in November at 14:15 СЕТ. The outlook is positive. Futures on the US stock indices are now traded considerably upwards. The dollar index is traded sideways ahead of the Fed’s Chair Janet Yellen statement. She is supposed to deliver her speech on Wednesday.

European stocks are currently rebounding after a significant fall on Friday and over the whole last week. For example, the British stock index, FTSE 100, hit the record weekly low over more than three years. Important macroeconomic data is not released today in the EU. The market growth is caused mainly by the oil stocks rising of such companies as Total and Royal Dutch Shell amid a slight increase in hydrocarbon prices. 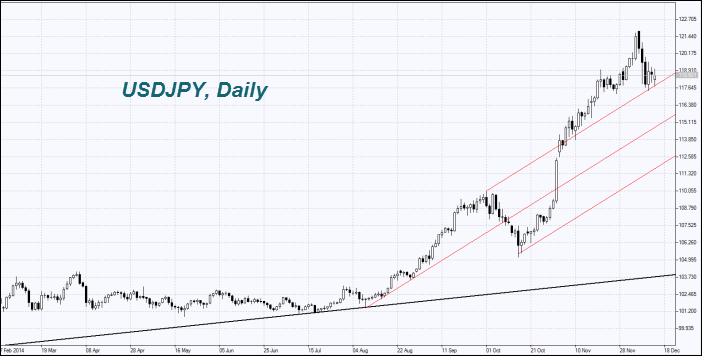 Today Nikkei has slid on the worsened Tankan survey. The yen weakened slightly against the US dollar (modest increase on the chart) as supporters of the current Prime Minister Shinzo Abe won in parliamentary elections on Sunday. Note that in two years while he is heading the government of Japan and conducts his economic policy called “abenomics”, Nikkei has boosted 70%, and the yen hit a seven-year high (a weakening against the US dollar). Market participants are currently expecting further confirmation of these trends. New Japanese macroeconomic reports will be released on Tuesday night. HSBC Manufacturing PMI in December will be announced in China tomorrow morning at 1:45 СЕТ. In our opinion, the forecast is still quite negative and can affect the commodity futures prices.

Oil prices have slightly risen after the release of its price forecasts for the next year. According to Barclays bank, the average Brent crude oil price in the first half of 2015 would be $67 a barrel, and $78 in the second half of the year. National Australia Bank projects the Brent price to settle at $75 a barrel in the Q1 of 2015, and $80 by the end of next year. According to Commodity Futures Trading Commission (CFTC), despite the fallen oil prices WTI net long positions rose to the two-month high and net short positions reduced to its lowest level since August 2014.

Natural gas prices in the US climbed amid falling oil prices. It was facilitated by the demand increase due to cold winter weather. We also accept the possibility that a part of the shale gas equipment could be used for the shale oil extraction.

Gold prices have fallen ahead of the Fed meeting and the final press-conference which will take place on Wednesday evening. Gold is still 1.5% up compared to the level at the beginning of this year, after falling 28% in 2013. Market participants are concerned that a possible US rate hike would reduce the demand for precious metals. According to CFTC, gold and silver net long positions reached the highest level over the last four months.