Posted by Administrator on Oct 27, 2014 in Forex Forecasts & Analysis | 0 comments

World markets went on rising on Friday. S&P 500 climbed 5.5% during the week, the 2-year high. The macroeconomic data was neutral on Friday. Microsoft good earnings report boosted the stock prices. Its stocks rose 2.5% and Procter & Gamble (+2,3%). Amazon stocks tumbled 8.3%, but it could not drag down the US stock market. However, the activity of market participants was considerably low. The trading volume on US exchanges was 5.3 billion stocks, 35% lower than the October average.

Currently, 205 companies listed in S&P 500 announced their earnings reports. The 69.8% of companies’ earnings outperformed the tentative forecasts. On average such a surplus was observed in only 63% of the companies since 1994. Profit forecasts overshot 59.8%. This is less than the average level since 2002, which is equal to 61% of the companies. Today Pending Home Sales in September are to be released at 14-00 СЕТ in the United States. The outlook is positive. It should be noted that S&P 500 upped 4.7% on the quarter-average since March 2009 to June 2014. This is almost five times higher than the quarterly average increase in GDP (+0.9%) for the same period. The gap in the growth rate of the American GDP and the US stock market is now the largest since 1947. S&P 500 has been rising for 68 consecutive months for the first time since 1938. In our opinion, all that may indicate that US exchanges may slump down again.

. European stocks ticked up on Thursday and Friday together with the American ones. Today they are down due to weak performance of the German economy in October, or the so-called Ifo indices. The results of the ECB stress tests also boosted the prices. These tests were failed by 25 European banks. At 14-30 СЕТ we expect the ECB to announce the conditions of covered bonds purchase. There is a possibility that this data may weaken the euro.

Today Nikkei dipped together with other world indices. The Japanese economy recovery is fragile and needs the monetary incentive, as the Prime Minister of Japan Shinzo Abe announced. According to his point of view, another sales tax hike is needed in order to reduce the budget gap. It may occur in April 2017. Tonight Retail Sales in September is to be released at 23-50 СЕТ in Japan. We assume the outlook to be negative. 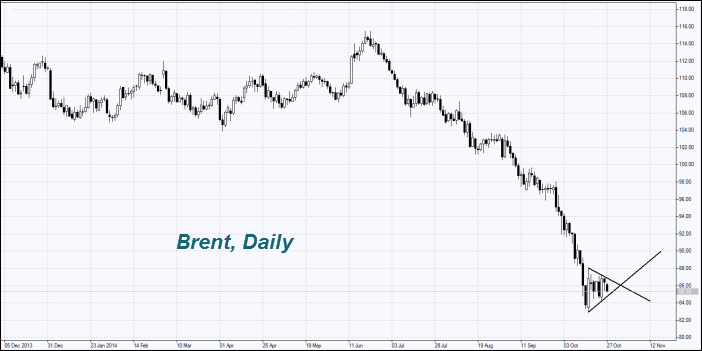 According to the US Commodity Futures Trading Commission (CFTC), hedge funds increased the number of oil net long positions by 5.7%. It happened regardless of Goldman Sachs report: the average Brent crude price forecast was lowered for the first quarter of next year from $100 per barrel to $85, and WTI – from $90 to $75 per barrel. Thus, in Q2 of 2015 a barrel for both types of oil may go down even $5 more. According to Goldman Sachs, the US demand for imported oil would be reduced as its own shale oil production increases. The states not included in OPEC, and especially Russia will not cut the production output since the country is in need of oil revenues amid the Western economic sanctions. In turn, we accept the possibility of a “technical” upward retracement of the world oil prices. It can be fostered by the recent news from India and Indonesia about a significant increase in demand for petroleum products in 2015. Thus, the diesel fuel consumption in India could increase 2.8% compared to the growth of 1.3% this year. Note that the current drop in oil prices was affected by the fact that OPEC production hit the three-year high, so in September it was 30.47 million barrels per day. At the same time, the US oil production reached the highest level of 9.5 million barrels per day since 1970. Meanwhile, it is hard to say whether the oil production will be increased, so that it would meet the rising demand of South-East Asia amid falling oil prices by 25%. 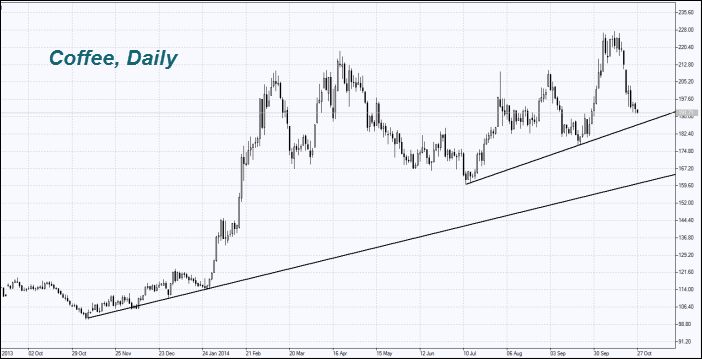 Dilma Rousseff’s victory at the presidential elections in Brazil pushed the world coffee and sugar prices down. Market participants believe that the Real weakening (Brazilian currency), which Dilma Rousseff stands for, can boost the growth of Brazilian exports. Let us remind you that since she has been at the office since 2011, Real to US dollar rate has fallen by about one third. We assume that in the midterm coffee and sugar price fluctuations would mostly depend on weather conditions and crop forecasts, and not on political factors.